Rabi Yehudah ha-Nasi (Judah ‘the Prince’) was a fascinating figure.

While remembered chiefly for his role in editing and redacting the Mishah, he also helped broker peace between the Jews of occupied Judea and their Roman overlords in the aftermath of the Bar Kokhba Revolt.

According to the Talmud, Yehudah was highly respected among the Roman aristocracy. In fact, he was a close friend of the emperor – Antoninus, often taken to be Antoninus Pius (whose temple, San Lorenzo in Miranda, still stands at the head of the Roman Forum).

Judah and Antoninus were friends throughout their life, often engaging in deep philosophical and spiritual discussions – the content of which I’ll go deeper into in future posts. But how did they meet? What was their connection? How did such a fruitful relationship blossom between an emperor and a rabbi?

Our story starts in the early 2nd century CE when the incumbent emperor Hadrian passed a decree banning the mitzvah of milah (circumcision). This put the Jews in an impossible situation. Violating the decree was punishable by death, while not fulfilling the mitzvah meant violating the covenant between the Almighty and His people.

At the time of the decree, Rabi Shimon Ben Gamliel, descendant of Hillel and son of the Sanhedrin, had a son. Yet as a man of infallible conviction, he was never going to put Roman law before the law of the Almighty. Just eight days after the boy’s birth, Shimon performed the ritual. Word soon got out, however, and he was summoned before the Roman governor to account for his crime.

Furious the religious leader’s disregard for the decree, the Roman governor summoned him to the imperial palace. There he interrogated Shimon, asking why he had defied Caesar’s orders and violated Roman law. Shimon responded thus:

Taken aback, the Roman governor replied that he had deep respect for Shimon as a religious leader, but that duty compelled him to send Shimon, his wife and son to Rome to be tried by Caesar himself. So he assigned them an imperial guard and sent them away on the long journey to Italy.

On the road to Rome

Travel in the ancient world was an arduous business, and the journey took many days and shortly before arriving in Rome, Shimon and his family stopped off at a lodgings outside the imperial capital. As God had ordained, the Roman empress was also staying at these lodgings, and she had just given birth to a son. As God had also ordained, Shimon’s wife and the empress had met previously and happened to be close friends.

When the empress saw Shimon’s wife in Italy she was shocked, asking what she and her family were doing here so soon after the birth of their son. Shimon’s wife burst into tears, pouring forth her whole desperate story, and despairing about their imminent execution on the orders of the empress’ husband.

Fiercely loyal to her friend, the emperess was determined to intervene. She knew she could not sway her husband from implementing punishment for breaking the decree, but she could save her friend’s family another way. She gave Shimon’s wife her own newborn son, the future emperor, and took the young Yehudah under her own care. She then ordered them on to Rome where they were to stand before the emperor.

The next morning, Shimon and his family were accompanied by Praetorian Guard to the Imperial Palace on the Palatine Hill.

Summoned into the aula (great reception hall), they stood before the emperor Hadrian who addressed them thus:

“I have heard that you have defied my imperial decree and circumcised your child. You do realize, don’t you, that you are liable for the death penalty for an act of treason?”

Shimon said nothing, but his wife stepped forward and asked the emperor to inspect her child before passing such a sentence. When the emperor saw that the child was uncircumcised, he was astounded.

“What is the meaning of this!” he roared. “This child is not circumcised! Is this some kind of joke? I will be writing to the governor immediately. Meanwhile, you Jews are free to return to your homeland.”

Shimon and his family left the imperial palace, passing through the city walls and on to the lodgings outside the city. There his wife reunited with her imperial friend and protectress, swapping back their infants and exchanging vows of everlasting friendship. 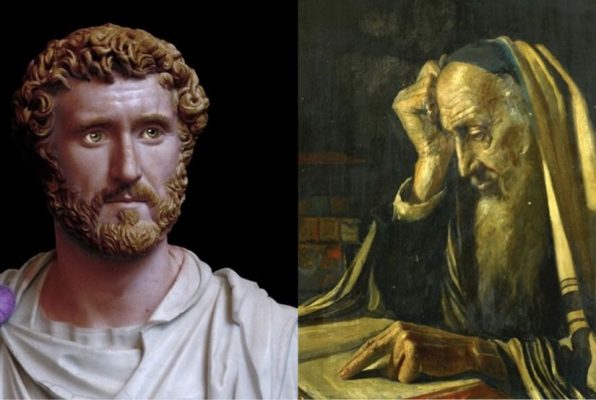 Their friendship lasted not just throughout their lives, but was passed down to their sons, the future emperor Antoninus and Rabbi Yehudah, who never forgot the everlasting bond their mothers had bestowed upon them.