No trip to Rome would be complete without indulging in the city’s renowned Roman-Jewish cuisine, which is why it pays to know where to find the best kosher restaurants in Rome.

Central to the capital’s culinary culture is its innovative creation: ‘la cucina ebraica-romana.’ Literally translating as ‘Jewish-Roman Cuisine’, its dishes bring out the best in Jewish and Middle Eastern flavors and Italian passion for fresh produce and simplicity.

Because Jewish-Roman cuisine has blended so successfully into the city’s food culture overall, it’s hard to guarantee that what you’re eating is truly kosher. That’s why I’ve written this piece recommending the best Kosher restaurants in Rome to ensure that you don’t have to compromise delicious dining for adhering to the kashrut.

Hidden away just behind the Ghetto, on the scenic Piazza Cenci, Yotvata Restaurant serves up some of the city’s most delicious kosher cuisine. Simplicity is at the core of Yotvata’s philosophy – traditional, home-cooked Roman-Jewish cuisine done well. But what differentiates Yotvata from all other kosher restaurants in Rome is that it produces its own dairy products.

Starting with the antipasti, the Fritto Yael is a must: a delicious trio of carciofo alla giudia (Jewish-style fried artichoke), baccalà (fried codfish) and zucchine (courgettes). For a pasta dish, nothing beats Yotvata’s gorgeous gnocchetti gorgonzola e noci (Gnocchi with gorgonzola and walnuts), although if you want to go for something less heavy and cheesy they offer up a range of delectable tomato-based meat and fish classics.

You’re spoiled for choice for secondi (second courses) as Yotvata serves a delicious range of kosher fish and meat dishes. But the highlight is probably the scallopine di pesce ai funghi (scallops with a fish and mushroom sauce). You can eat indoors or al fresco, but it’s worth booking, especially at the weekend, to avoid disappointment.

If you’re staking out something that satisfies the most carnivorous appetites, Bellacarne ranks high among the best kosher restaurants in Rome. Literally meaning “beautiful meat” in Italian, Bellacarne dishes up a delightful range of kosher classics. Home-cured and spit-roasted cuts tend to be the order of the day, with Bellacarne serving up Shabbat meals and sumptuous Saturday breakfast too. For something extra special, try out their Kosher carbonara.

Meaning “Really Good Roman Pizza,” Bona Pizza puts its money where its mouth is and lives up to its name by serving a delectable range of pizza al taglio (by the slice). You’ll find a few branches dotted around the city center, but only the store in the Jewish Ghetto serves up exclusively kosher pizza. Eat in or takeaway for the perfect snack or light lunch.

Set inside a century-old palazzo, Renato al Ghetto is an interesting affair aesthetically. Its minimalist decor blends effectively into the historic surroundings. But at Renato al Ghetto, it’s all about the food, which makes it among the best Kosher restaurants in Rome. Its carciofi alla giudia (Jewish-style artichoke) is without doubt among the best in Rome – fried to perfection and as crunchy as a crisp.

Elsewhere on the menu, you’ll find quirky Kosher twists on beloved Italian classics. The pappardelle al sugo di stracotto (thick egg pasta with stewed beef rather than the usual wild boar) is simply divine, as is the tonarelli with honey mushrooms, truffles and dried meats. Make sure to book as this place can get busy.

Despite what you might think, Baghetto doesn’t do Baguettes. In fact, there’s no sign of the French bread across any of their menus, which are instead characterized by a range of delicious Jewish and Middle Eastern cuisine.

Baghetto boasts three locations across Rome, with the flagship restaurant in the Jewish Ghetto. Its other branches also count themselves among the best Kosher restaurants in Rome. Baghetto Milky, located on the same road at no.2, accommodates for all your dairy needs while the Baghetto located up near Tiburtina  on Via Livorno 10, specialises in mouthwatering meat dishes. 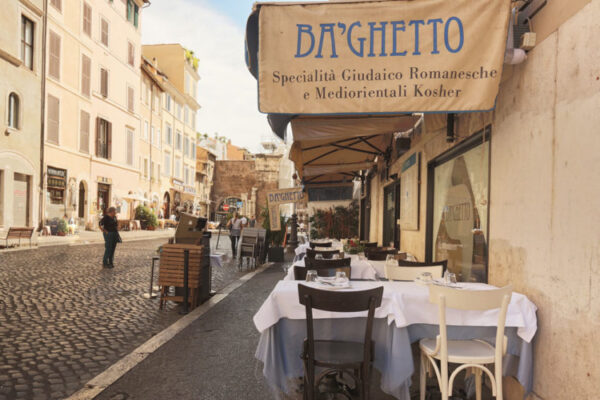 The Baghetto in the Jewish Ghetto offers guests scenic dining ‘al fresco’ during the summer months. Sat outside a first-century BC portico, dedicated by the emperor Augustus to his late sister Octavia, you can soak up the atmosphere while dining on such classics as Jewish-style Graffi (lamb cheeks) and grilled cuts, paired with fine wines from Italy, Israel, France and Chile.

The right way to discover the best Kosher restaurants in Rome

Want to discover the best of Kosher Roman-Jewish cuisine with me, in the heart of the Eternal City? Check out my Jewish food tour. And if you want to learn how to recreate some of these recipes at home and become the champion of dinner parties, check out my Kosher cooking classes.